The Revd. John Carhart gave a fascinating sermon on Sunday, 27th June in celebration of the 134 years since St Mary’s was dedicated in 1887.

In his sermon John looked back in gratitude and thanksgiving to Almighty God for our benefactors and all those who over the last 134 years have worshipped here and served God in the community.

St Mary’s has always been at the heart of the community ever since it was built to serve the burgeoning population “Without the Walls”.

Looking back to the early days of the church at St. Mary's, John admired the vision of Hugh Lupus, First Duke of Westminster, who built the church, and others who furnished it. They built well with firm foundations: they built to last!

THE CHURCH OF ST. MARY-WITHOUT-THE-WALLS 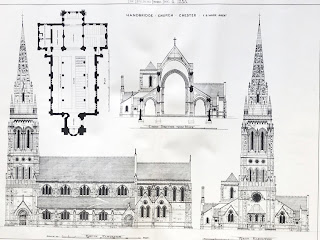 The name of our parish is St. Mary-on-the-Hill, Chester. It is an ancient parish and the original twelfth-century Church appears to have been called, formally or informally, "St. Mary's of the Castle" because St. Mary's was the Castle Church, situated next to Chester Castle, the residence of the Earls of Chester. From the twelfth century until the nineteenth century the parish church remained adjacent to the Castle.

Our Church of St. Mary-without-the-Walls (the word "without" means "outside") is built on land within the original parish of St. Mary-on-the­ Hill. During the nineteenth century there had been a growth of suburbs around Chester. Churches in the outlying districts of Upton and Saltney (both remaining within the parish of St. Mary-on-the-Hill) were consecrated in 1854 and 1855 respectively. Substantial changes were made in 1881 and 1882 to the boundaries of ecclesiastical parishes and in 1882 Upton became a separate benefice. The patronage had passed to the Grosvenor family in 1819 and St Mary’s shares with Upton the same patron, the Duke of Westminster. In 1883 Archdeacon Darby submitted proposals to the Duke of Westminster for a further reorganisation of parish boundaries under which our parish of St. Mary-on-the-Hill would retain its large area south of the River Dee but would release certain lands within the City walls to enable them to be allotted to the parishes of St. Bridget and St. Michael. Our parish was to receive the land on the south of the river which was previously in St. Bridget's parish.

The Duke not only approved of the proposals but immediately promised to assist by building at his own expense a new parish church (to be called The Church of St. Mary-without­ the-Walls) on the south side of the river.

The site chosen was occupied by 29 old cottages, the occupants of which were subsequently housed on a new site near the cemetery.

The Duke in fact gave not only a new Church, but also a Rectory; and in addition he enlarged the adjacent school. The foundation stones of the Church and Rectory were laid on 20th July 1885. The Church was consecrated on Saturday, 18th June 1887 by the Bishop of Chester by the name of "The Church of St. Mary-without-the-Walls, Chester".

The ancient Church of St. Mary-on-the-Hill was transferred to the parish St. Bridget and shortly afterwards became the parish church of the united parishes of St. Bridget's and St. Martin 's. Following further changes that building was declared redundant by the Church Commissioners in 1972 and it was purchased by Cheshire County Council. It is now known as St. Mary's Centre and is used as a centre for meetings, exhibitions and events.