POSTCODE LOTTERY FUNDING FOR THE CENTRE 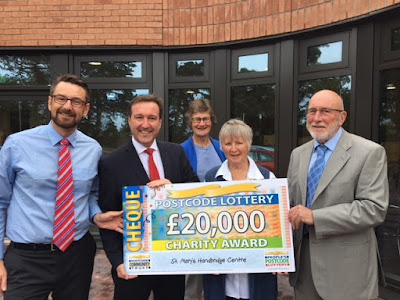 CHRIS MATHESON MP WELCOMES £20,000 PEOPLE’S POSTCODE LOTTERY FUNDING FOR ST MARY’S HANDBRIDGE CENTRE
St Mary’s Handbridge Centre has received a £20,000 funding boost from Postcode Community Trust, a grant giving charity funded entirely by players of People’s Postcode Lottery.
Ted Graham was joined by local MP for the City of Chester, Chris Matheson, as he received the cheque from People’s Postcode Lottery’s head of public affairs, Malcolm Fleming on Tuesday 18 September, 2018. Alison McLellan and Helen Brophy were also present, with both being extremely instrumental in the supporting and planning of the new centre.


Ted said: “Receiving this award of £20,000 will make a massive difference to the way that our fantastic new community centre can be used and will allow us to accommodate more groups than would otherwise have been the case.”

Speaking at the event, Chris Matheson said: “On behalf of the local community in Handbridge and Chester, I would like to thank players of People’s Postcode Lottery for this award from Postcode Community Trust. This funding will go a long way to addressing the needs of the community and in helping to reduce social isolation by bringing people together.”

Posted by St Mary Without-the-Walls at 21:54