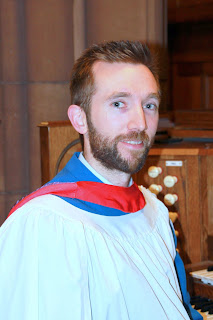 Michael is a former Head Chorister of Chester Cathedral, where he first learnt to play the organ and had lessons from the assistant organist, Edward Wellman and later had tuition from Roger Fisher.  Michael studied music at Durham University, where he was organ scholar of St John’s College.  In Durham he played in the band for many of the musical productions including Kiss me Kate, Westside Story and Fame!

Michael also teaches the piano at the King’s School in Chester and has recently started a new music school, Keyboard Kids (www.keyboardkids.co.uk) which teaches KS1 and KS2 children the basics of music in fun group sessions.
When he’s not teaching, Michael enjoys doing the Parkrun in Delamere Forest or going for a bike ride.  He lives in Tarvin with his wife Caroline and two children Matthew and Sophie.
Posted by St Mary Without-the-Walls at 16:23